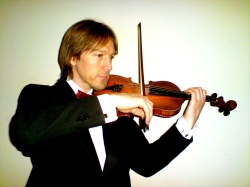 Chris, leader of the quartet since its formation in 2003, was born in Widnes but has lived in North Wales since 13 months old. His study of the violin started approximately 30 years ago through the school system and continued on various courses at Bangor, The Royal Northern College of Music, Canford, The Ernest Reid Music Association at Wantage and he has worked with prestigious teachers, such as Barry Haskey, Ben Holland, Penny Stirling and Edward Davies before studying for his diploma with Michael Gatward

He has played with various orchestras, including Clwyd Youth Orchestra, North Wales Youth Orchestra, Wrexham Symphony Orchestra, Cambrian Philharmonic, Opus One, St Albans Symphony Orchestra, North Wales Philharmonia, Bangor University Orchestra, Bangor Music Society Orchestra as well as leading the band for various shows at Venue Cymru.
From an early age Chris was involved with musical theatre starting with a summer season with Ivor Emmanuel, a subsequent summer season with Gary Wilmot and during his teens was a member of the Prince of Wales Theatre Workshop. In the latter years he has been musical director of Colwyn Bay Operatics, Llandudno Operatics, Llandudno Musical Productions and the Harmony Singers, where his duties also include arranging and engineering the music. He has also been on the adjudicating panel of the ‘Musical Theatre Young Musician of the Year’ competition.
His teaching positions for the last 18 years have been with Conwy LEA, the Mathias Trust, North Wales Music Tuition and St. David’s College and he also takes private pupils. 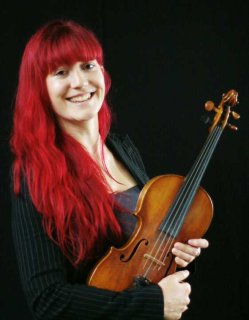 Katherine founded the quartet in 2003 whilst studying music at Bangor university. She gained a first class honours in 2005 which won her the prestigious Drapers Scholarship, enabling her to study performance at masters level; completing her MA in 2007. She is currently working on a PhD in music composition and her music has received airplay on BBC Merseyside. She has taught the violin in schools around the area and up to degree level at the university; she also coached the county junior orchestra. Katherine has been involved in numerous recordings of different musical genres, ranging from Death Metal and Jazz to Baroque and Classical in North Wales (for artists such as Gwilym Morus), and also in Yorkshire, where she originally comes from. One of her most recent recordings was playing 1st violin for the quartet on the soundtrack (composed by Pwyll ap Sion) for the remake of the 1935 first welsh “talkie” Y Chwarelwr. She has also been involved in the music for the credits of several S4C programmes.

Whilst at university, Katherine led Bangor Baroque Soloists for three years, gaining skills for performing Baroque music with historical accuracy. Katherine also led the Music Society Orchestra and co led the University Symphony Orchestra with her teacher Rosie Skelton. She has also performed concerti with the University Symphony Orchestra and Bangor Baroque Soloists and in 2006 was invited to play unaccompanied solo Bach at the ten university degree ceremonies. As well as being taught by Rosie Skelton and Edward Davies whilst at university, Katherine also had individual Baroque coaching from Sir Nicholas Jackson of the Concertante of London, and lessons on performance of concerti from Daniel Rowland – 1st violinist of the Brodsky quartet and international soloist. 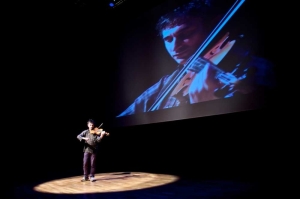 If, for some reason, one of the above players cannot play at your event, due to sickness or lack of availability, we will fill the gap by ensuring that a musician of an equally high standard (from the pool of players we call on in such circumstances) can play instead.